DUE TO THE CURRENT AND PROJECTED AMOUNTS OF SNOWFALL, SHOSHONE COUNTY PUBLIC WORKS IS ASKING THAT ALL RESIDENTS IMMEDIATELY REMOVE THEIR VEHICLES, TRAILERS, AND OTHER ITEMS FROM SHOSHONE COUNTY ROAD RIGHT-OF-WAYS. VEHICLES, TRAILERS, AND OTHER ITEMS ON THE COUNTY RIGHT-OF-WAY THAT HINDER SNOW PLOWING OPERATIONS WILL BE TOWED. WE WILL MAKE EVERY EFFORT TO CONTACT THE PROPERTY OWNER PRIOR TO REMOVAL.

FOR PUBLIC SAFETY PURPOSES, IT IS IMPERATIVE THAT OUR SNOWPLOW OPERATORS ARE ABLE TO CLEAR AND MAINTAIN THE ROADWAYS FOR EMERGENCY VEHICLES, SCHOOL BUSES, AND VEHICLE TRAVEL.

Shoshone County Public Works is committed to serving the residents and visitors of our county to the best of our resources and abilities, and to maintain a safe and reliable road system.

The Shoshone County Public Works Road & Bridge Department is responsible for the maintenance of approximately 377 miles of county roads. These roads are further broken down into the following surfaces

Thompson Pass – We plow Thompson Pass until the 1 st Monday following Thanksgiving and reopen the pass as weather and snow levels permit in the spring. 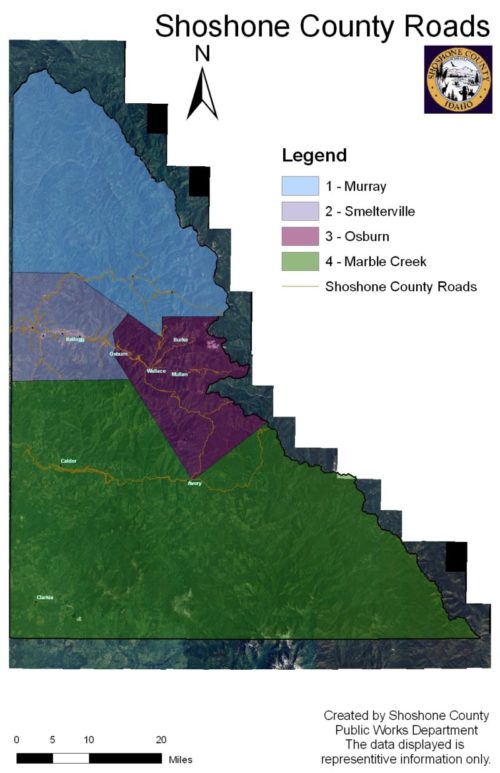 The Shoshone County Road Department will have a very busy construction schedule this year.
Construction Projects in 2018 include:

We will do our best to limit any inconvenience during our paving projects. We appreciate your
patience and understanding.

In accordance with Section 49-1005, Idaho Code, the County of Shoshone’s Department of Public Works, charged with the maintence of county roadways, has the authority to reduce the permissible sizes, weights, or speeds of vehicles operating on its road system for any periods as may be necessary for the protection of its roads or for public safety.

Purpose
Road weight limits and speed limits are designed to ensure public safety and to prevent structural damage to Shoshone County roadways resulting from the operation of heavy vehicles in changing climatic conditions.

Load Restrictions
During winter months, the moisture found in the soils and gravels below a road’s surface freezes.  The depth of this frost zone varies depending upon the length and severity of the winter season.  This frozon zone begins to thaw from the surface down, at varying rates.  The moisture released by the thawing soils and gravels is trapped near the surface between the pavement and frozen soil below.  When this occurs, the overhead passage of heavy equipment can create a “bouncing” or “pumping” effect on the trapped moisture layer, and can severely damage the roadway’s structural integrity and significantly decrease its lifespan.

Types of Load Restrictions
Depending upon the type of road construction, the amount of moisture, temperature conditions and the severity of frost heaves and breakup, roads or sections of roads, the following restrictions will be posted in order to protect the roadway and to ensure public safety.

The load bearing capacity of a county’s roadway may be temporarily restored by a freeze-up of the pavement after a section has been posted for load and speed restrictions.  Typically, during cold weather snaps, trucks and heavy equipment may be granted access to roadways in Shoshone County after temperatures have dripped to 20 degrees Fahrenheit for three successive nights.  The County will post green markers on road weight limit signs to signify the temporary waiver of spring break-up restrictions.

Speed Restriction
Streets and roadways within the county are restricted as posted.